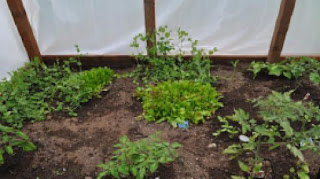 We are spending our weekend hours tending to our own vegetable beds. Our lettuce, peas, beans, celery and carrots are coming in nicely. The raspberries, blueberries and apple trees are laden with future fruit. It is our favorite time of year.

Posted by Jefferson Landscaping at 8:06 AM No comments:

Legumes: Beans, peas and lentils are staples of our diet all over the world and have been cultivated for 6,000 years. Peanuts, licorice, tamarind, fenugreek and jicama all belong to the bean family. Despite, its name coffee is not a bean but a cherry.

Tomatoes: Tomatoes are the fruit of the vine that’s native to the South America Andes. They started being taxed as a vegetable in 1883. Prior to 1820, everyone thought tomatoes to be poisonous. Tomatoes are number one! More than 60 million tons produced annually beating out banana’s by a third.

Peppers: Bell peppers have no “bite at all since they contain a recessive gene that eliminates capsaicin. Chili Peppers can be mild or hot enough to cause damage.

Basil: Basil also had a dubious reputation but in the 17th century it was redeemed. In Italy Basil is considered a sign of love. In India, it is sacred, dedicated to Vishnu and Krishna. Basil is also considered tomatoes soul mate as proven by the caprese salad.

Cilantro: Cilantro is a member of the carrot family. It was also one of the plants growing in the Hanging Gardens of Babylon more than 2,500 years ago.

Posted by Jefferson Landscaping at 8:00 PM No comments: